Left Andorra to join my friends in Anglet a city on the Atlantic Coast in the Pays Basque. 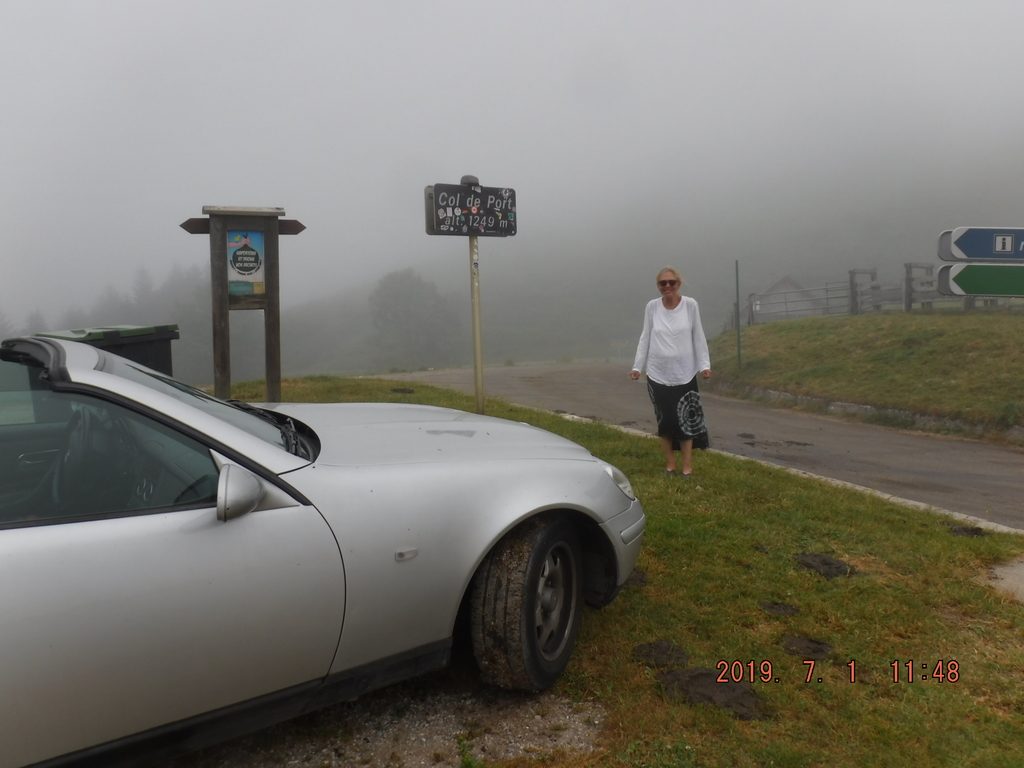 Low cloud cover, cool tempatures, making it to the col du Port.
Port pass in English but if you use the French sequencing it is called Pass Port. 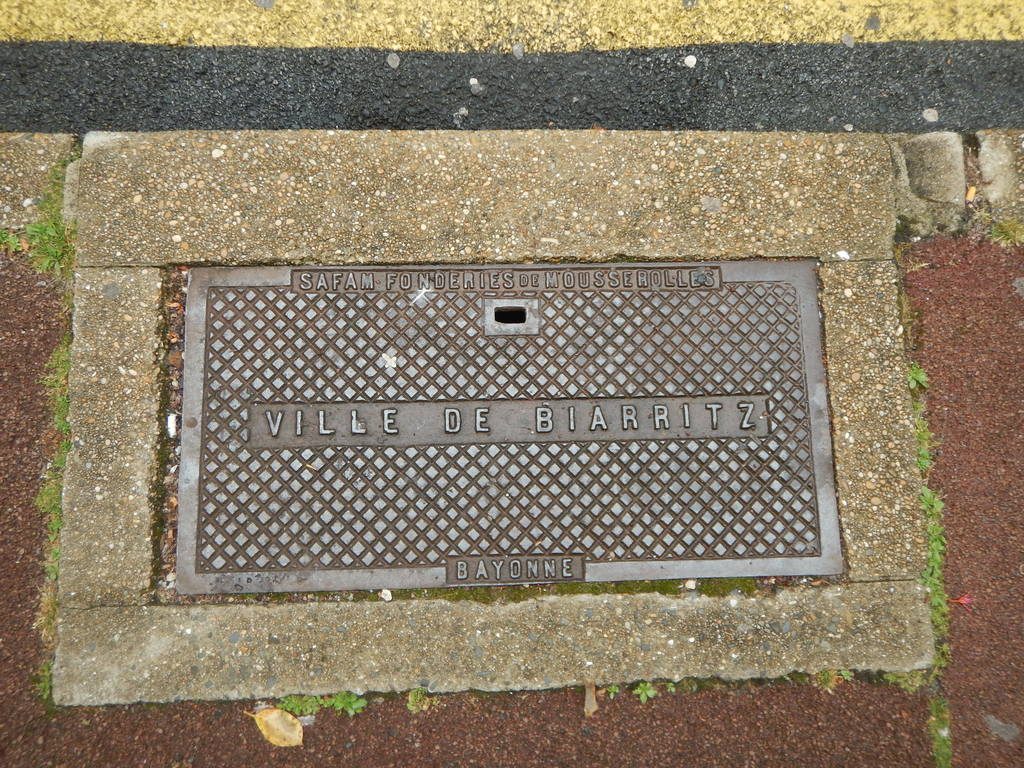 This is to prove that we made it. 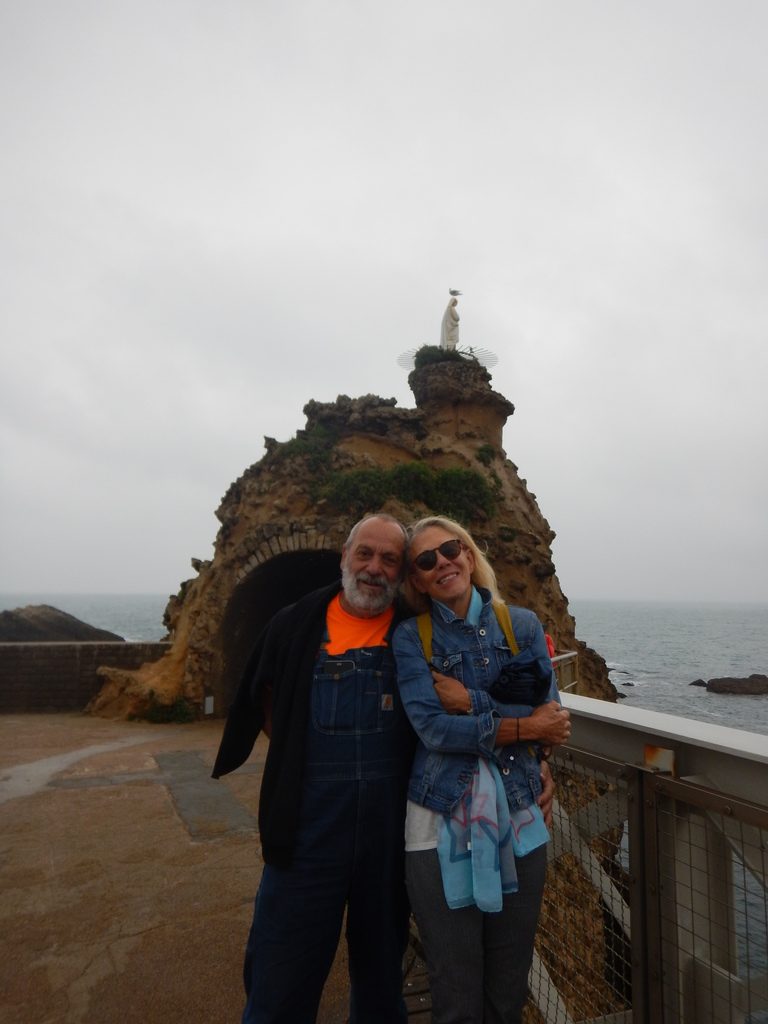 Another picture to prove we made it to Biarritz. Could not escape the standard picture. 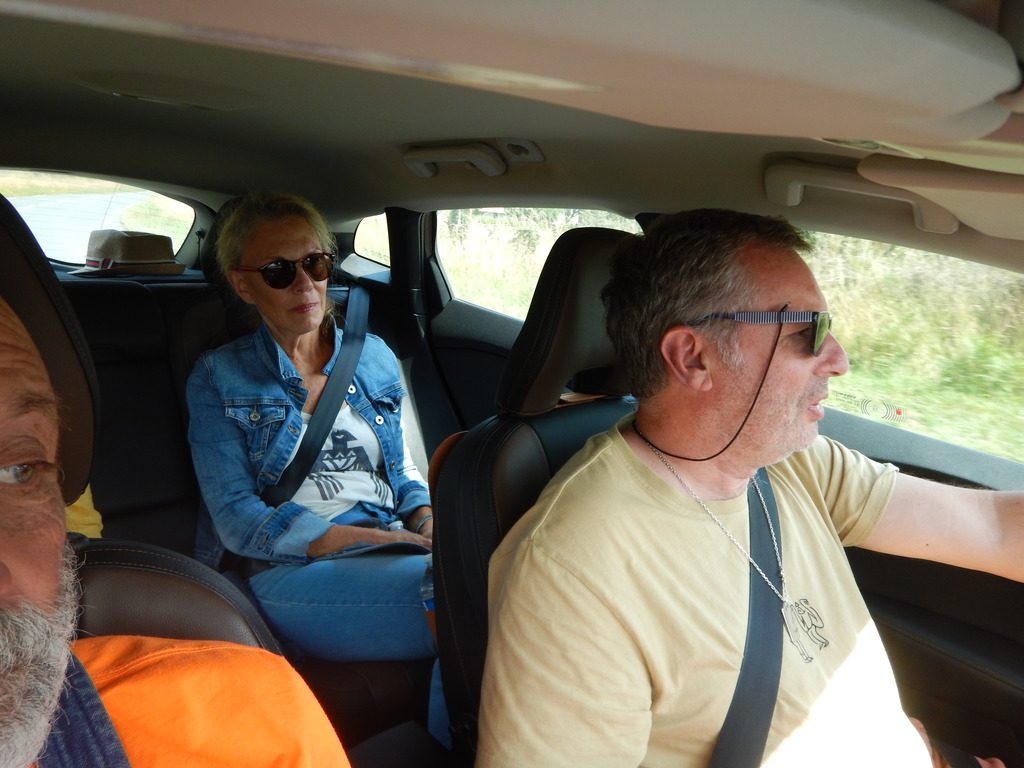 Marie & Philippe drove us around the area.
Let us remain as Latin as possible, the men sit in the front, the ladies behind. 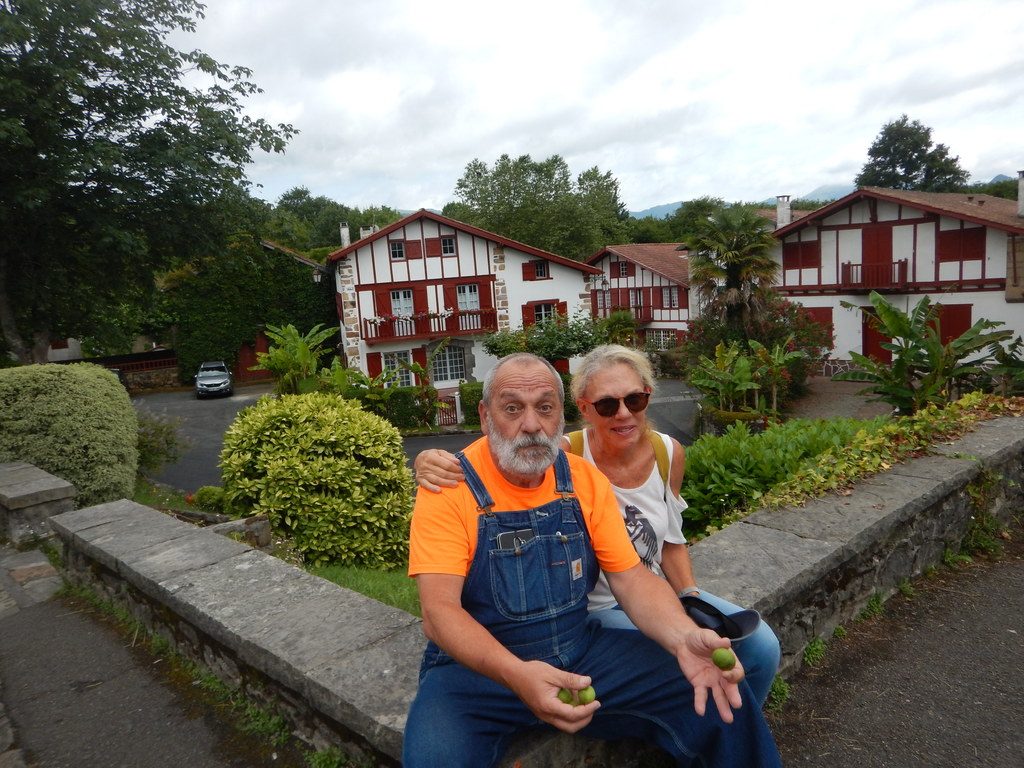 A typical architecture of the Hinterland of the Pays Basque.
Found fresh nuts,  an opportunity for a lesson in Natural Sciences later. 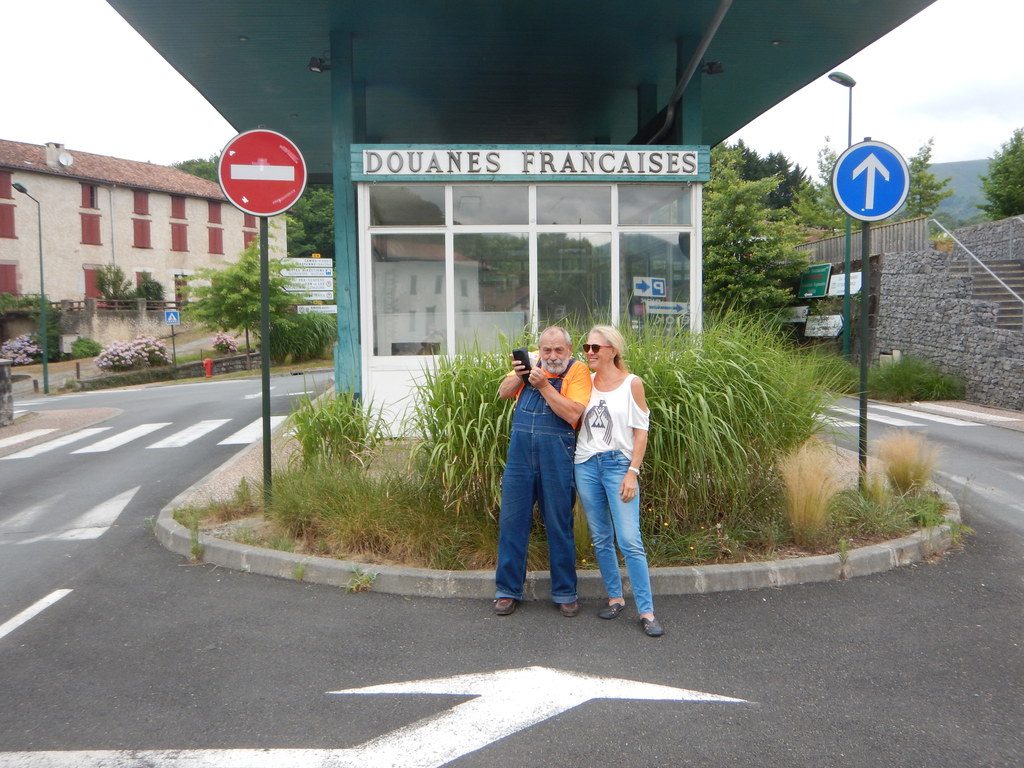 Here a remainder of the Old Europe when, before the European Union, borders tried without any success to slow commerce and people migrations.
Bankrupt Chicken Bonespur in Washington should try to understand History and stop bragging about a stupid, costly an useless wall. 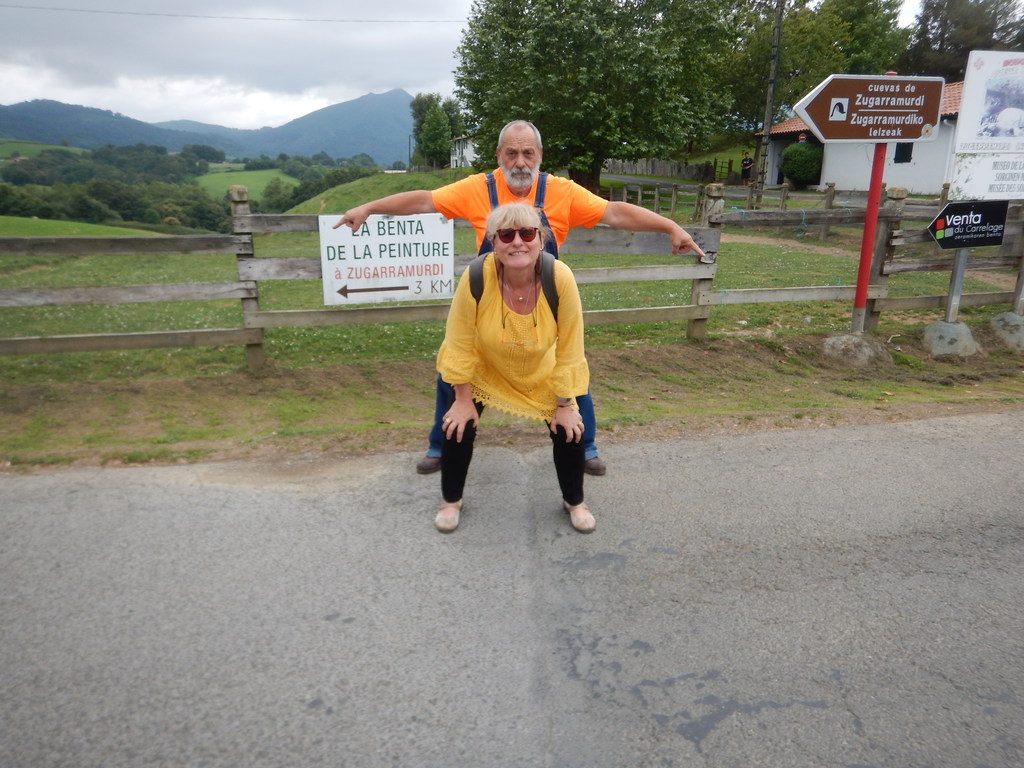 Here with Marie, our right foot is in Spain, the left one in France.
And on this road, there has never been a border building, even during the nasty days of the Franco dictatorship, the flow was unchecked, the crime rate lower than any where else.
Does this ring a bell? 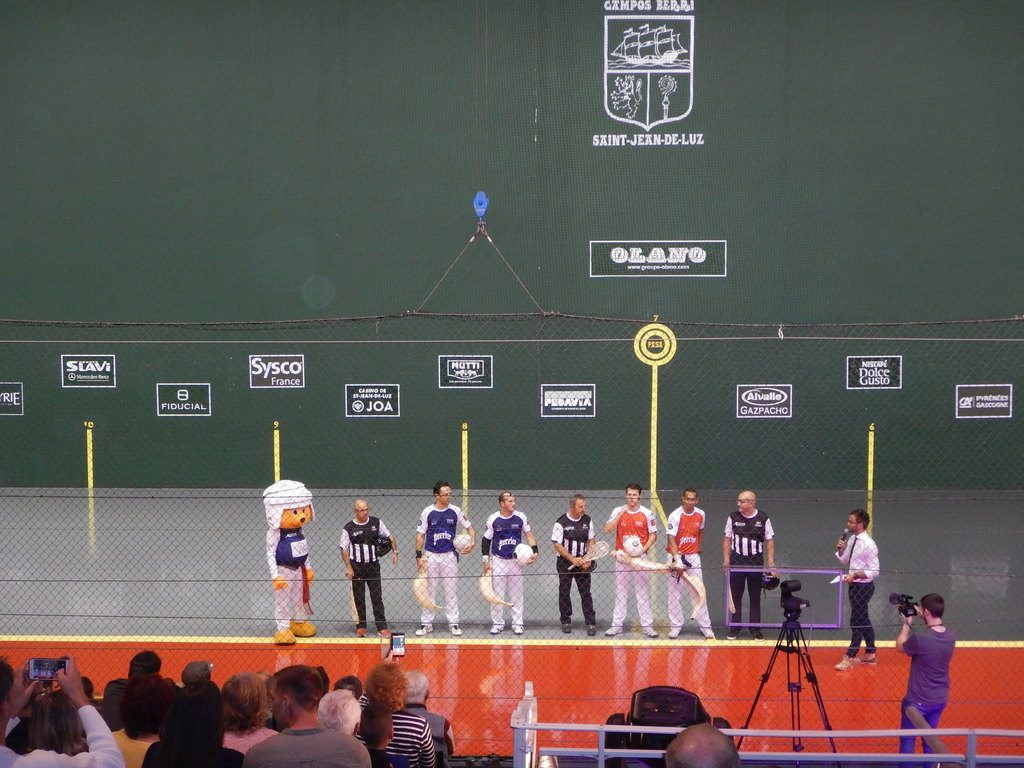 An evening at Saint Jean de Luz for a doubble game of Cesta Punta. 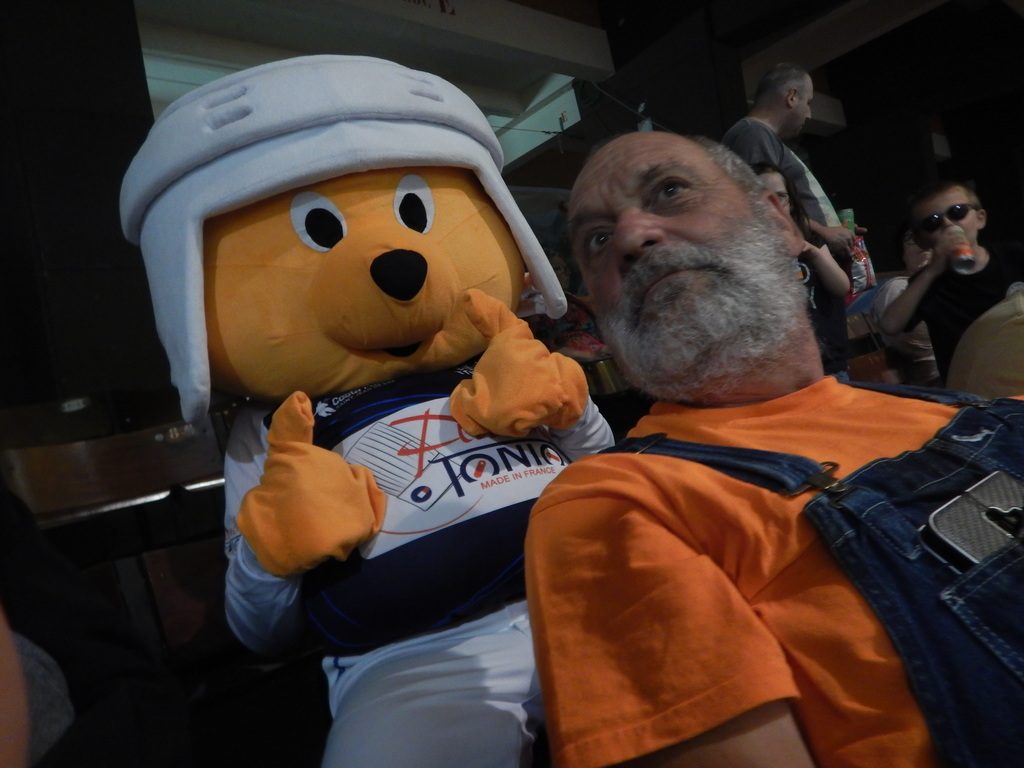 Could not escape a meeting with the local Mascott. 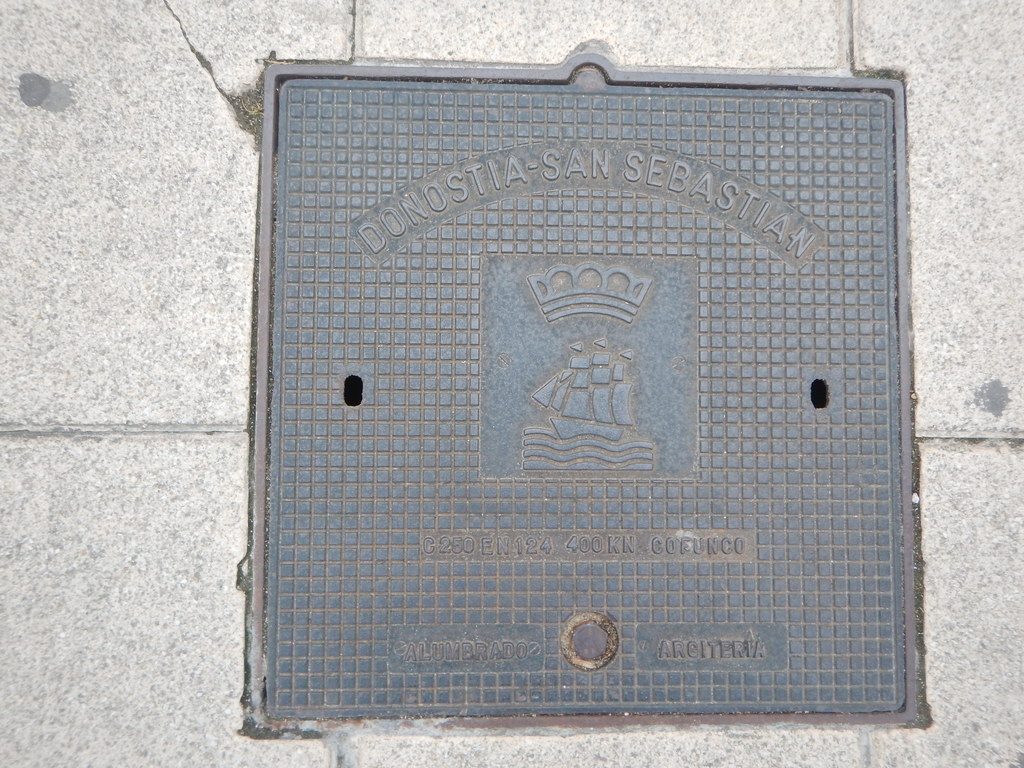 A day in Spain at San Sebastian or Donostia depending if you feel Spanish or Basque. 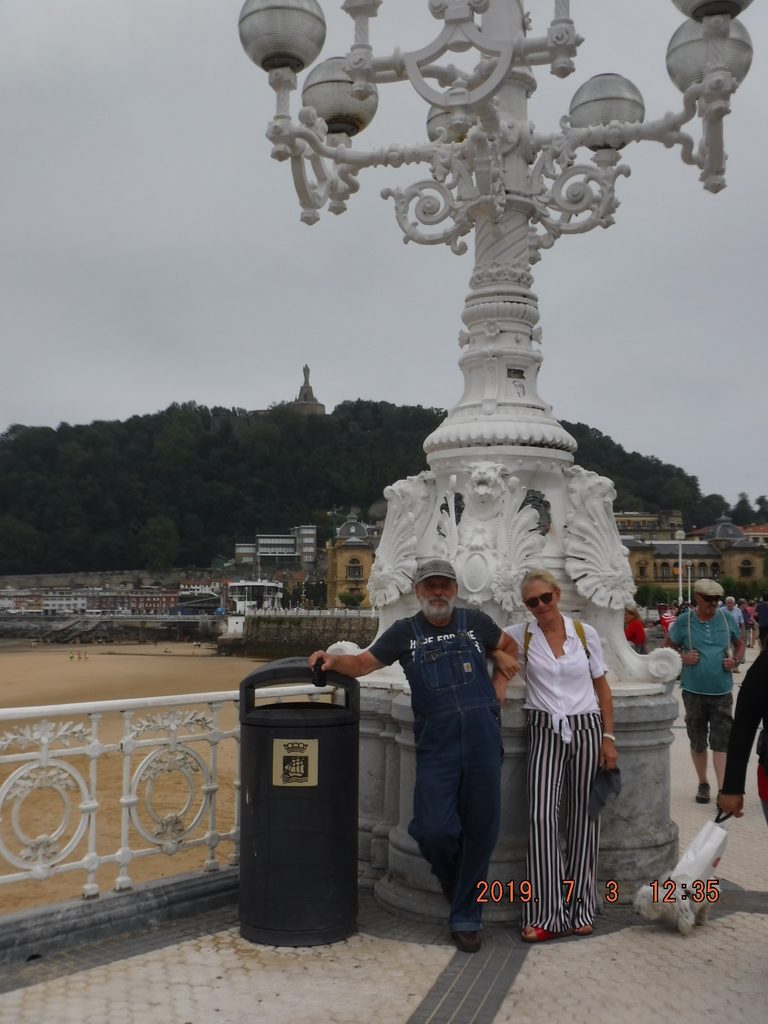 A walk on the sea side, Susan and Marie along the sea, Philippe and I remaining on the Broad Walk.
We woke up late as the previous evenig at the Jai Alai took a toll seen below. 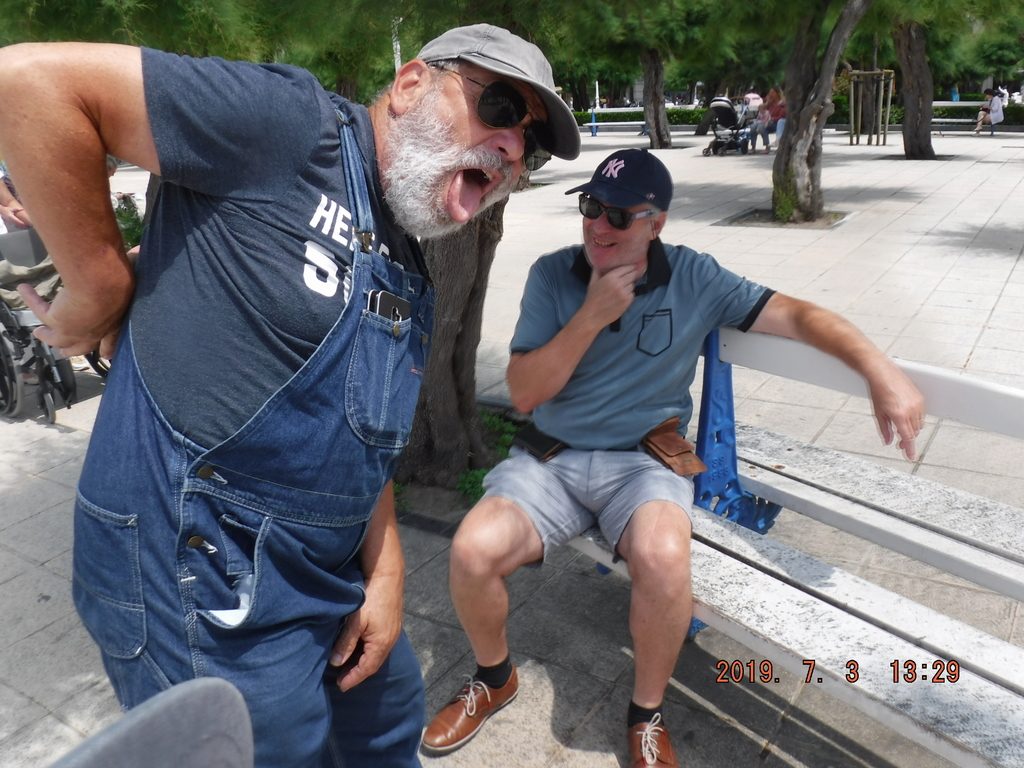 We had to explain that thirst was about to create a pair of Widows. Message heard. 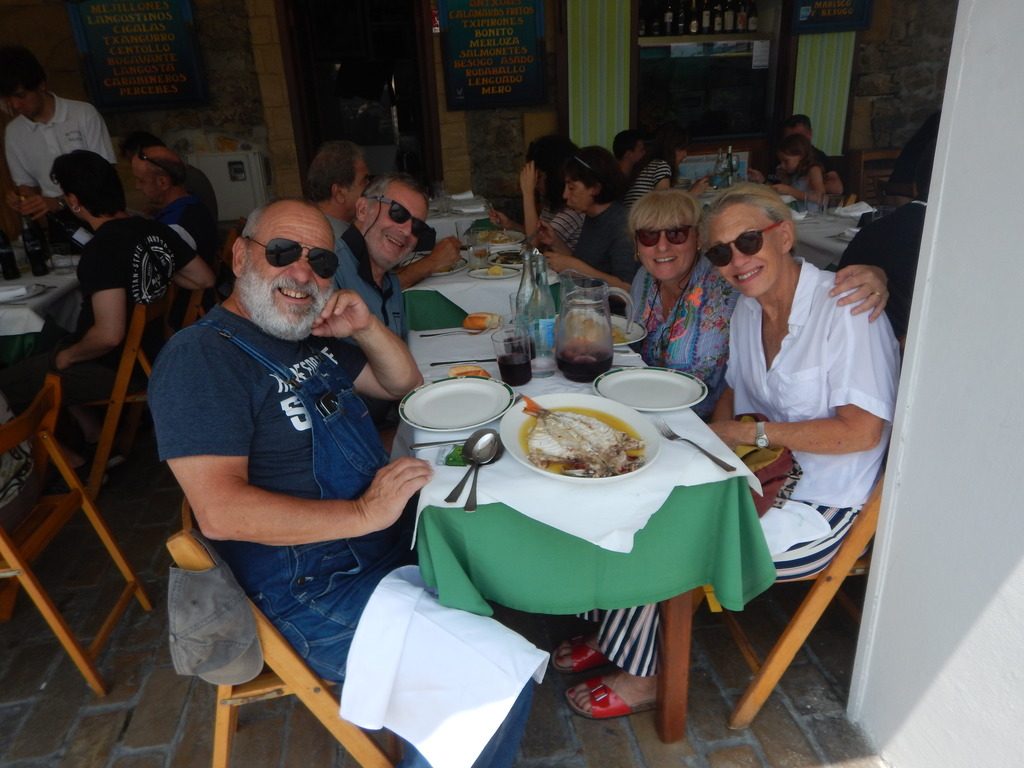 Therefore the mandatory first pit stop, just after the walk, was at the restaurant on the harbor. 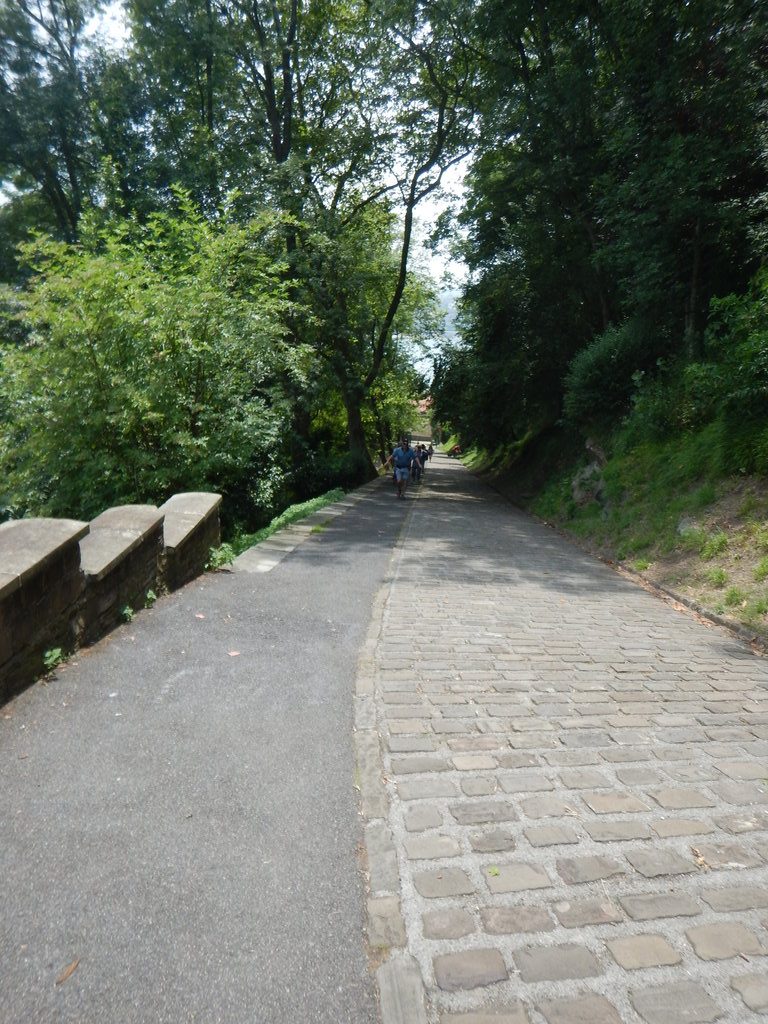 Marie succesfully convinced us to climb the hill where in the Fort overlooking the pass to the Bay. No lift, no chopper but feet, sweat and pain. 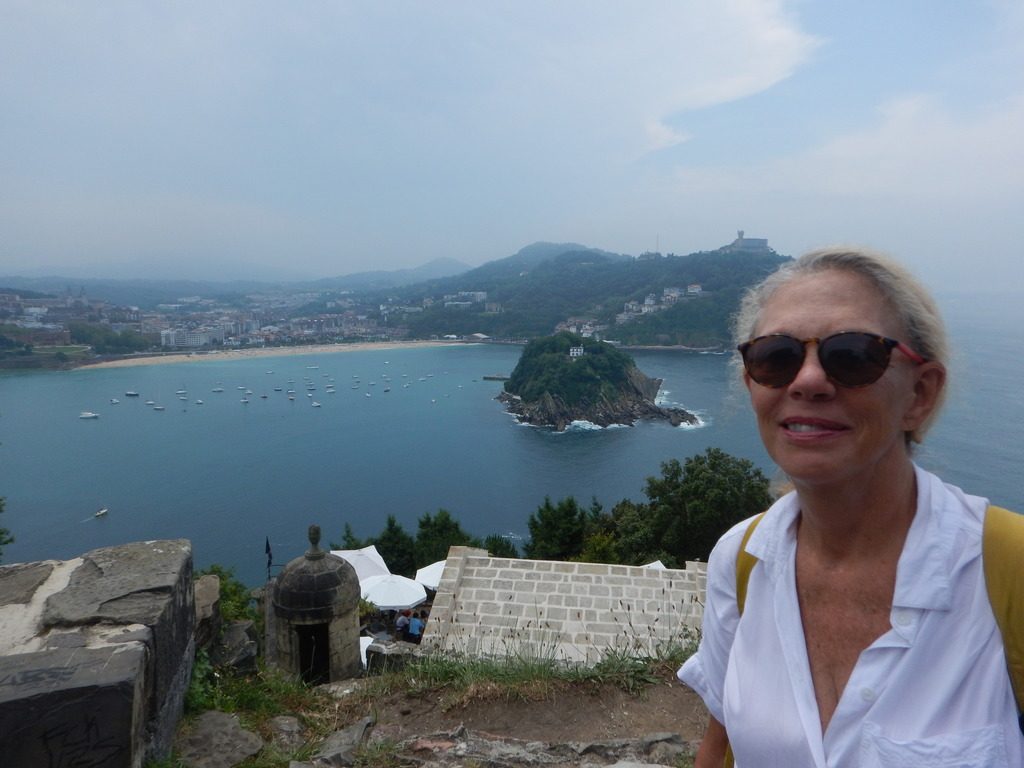 On the other hand the view from above was worth the pain. 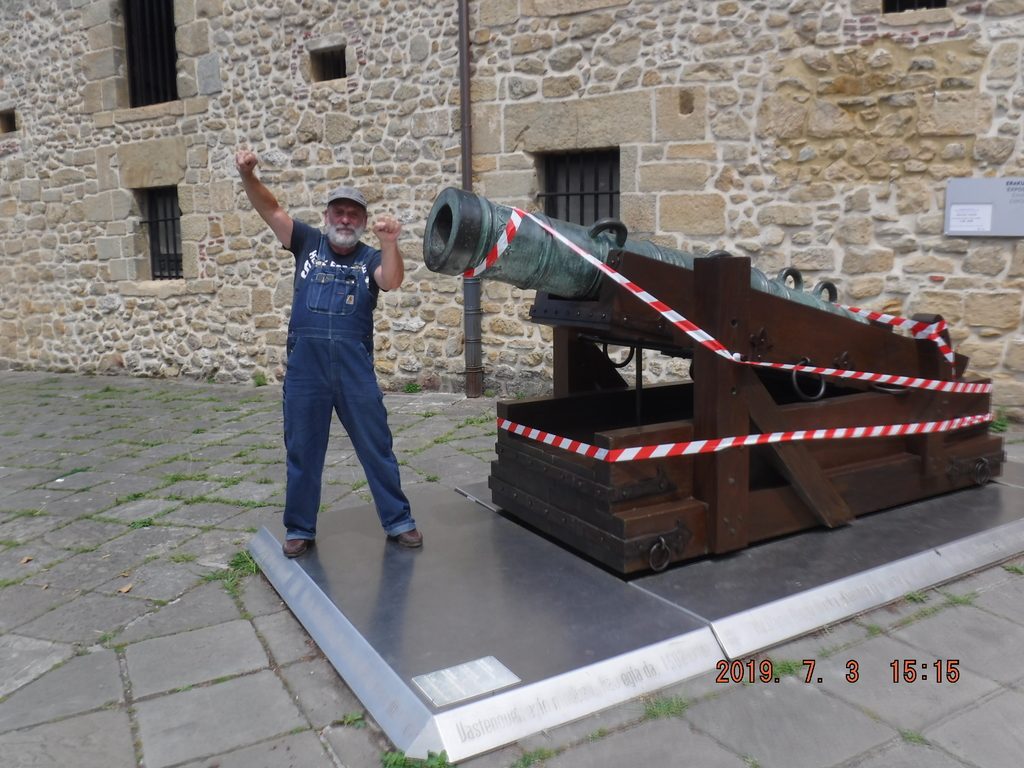 I told you it was a Fort. Tried to load the gun and check if the second Amendment makes sense here. 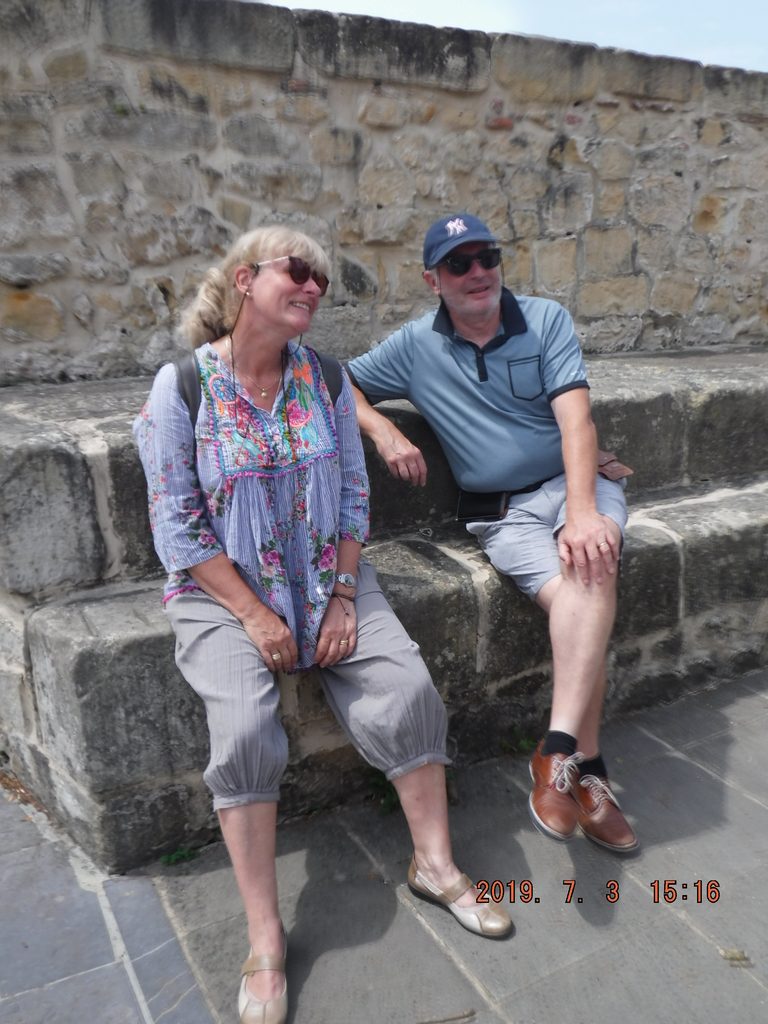 The public, Marie and Philippe, cheer the performance. 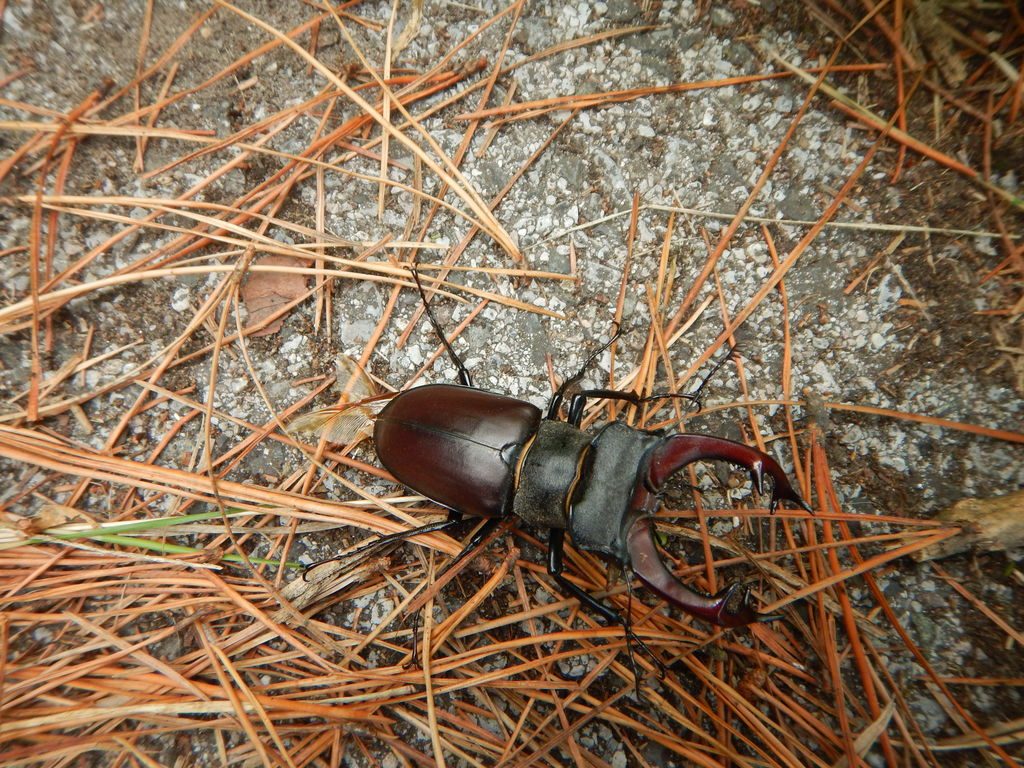 On the way down we met a local.

After this too short introductary stay in Biarritz, a musical dinner beautifully ended our stay.
Thank you Marie and Philippe, you made me rediscover the area I visited 54 years ago.

On the way to Bordeaux. 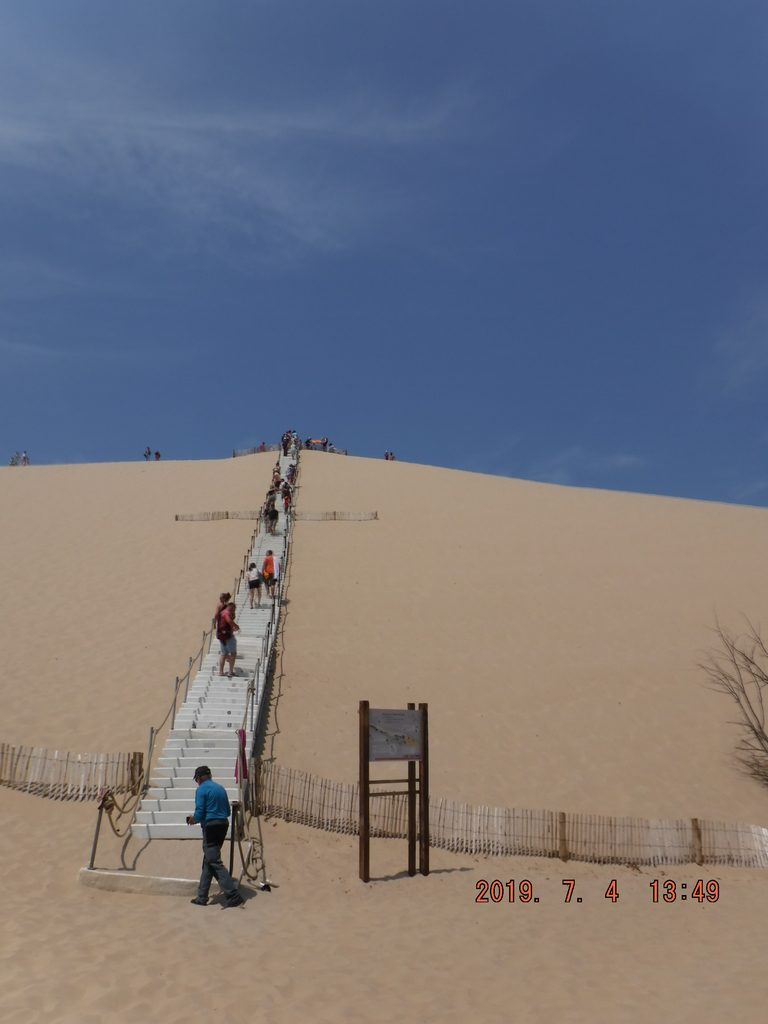 Before our final evening destination, we stopped at the Dune du Pilat. 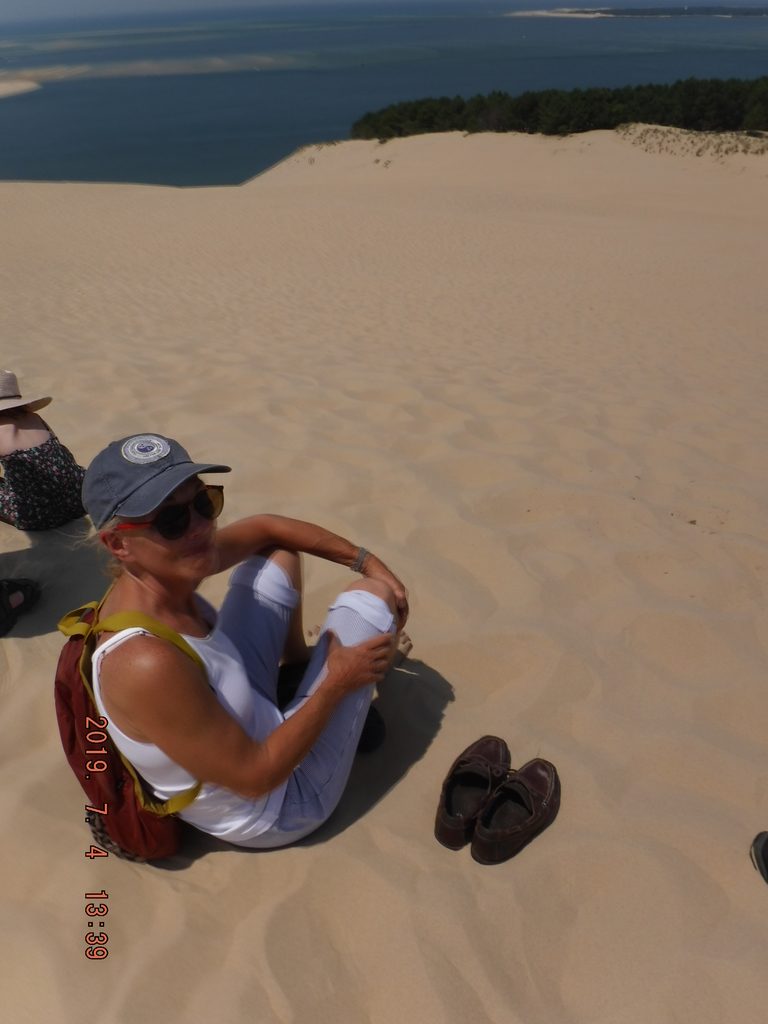 Susan made it to the top quite exhausted. 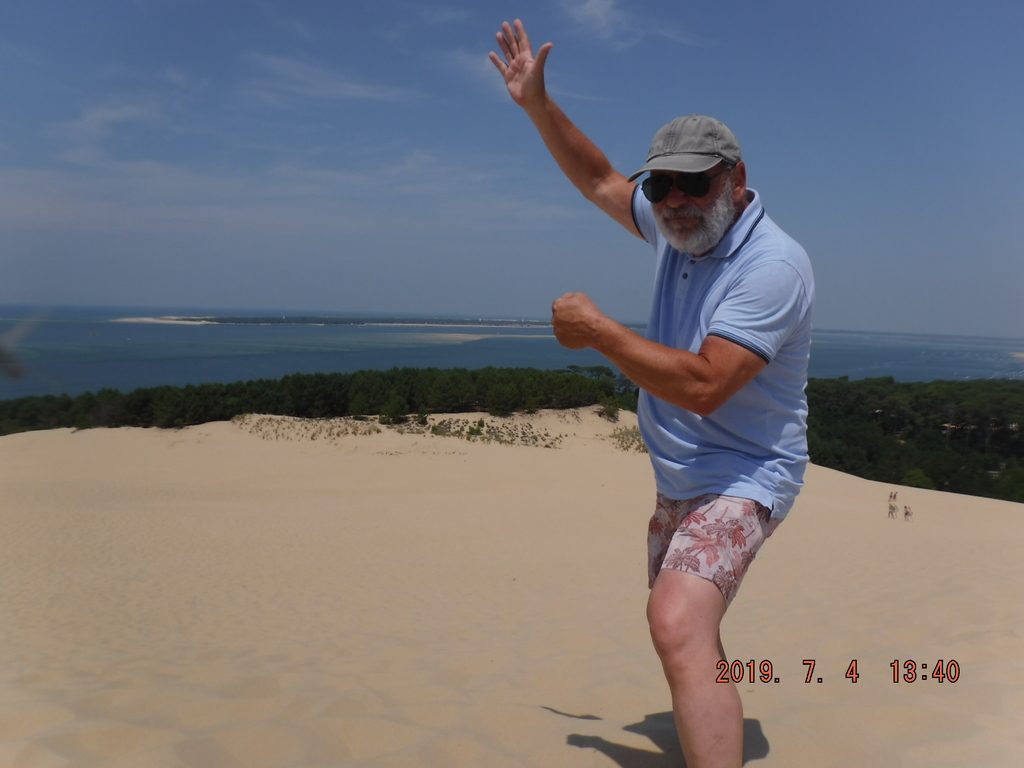 I was the only one able to plant the flag of Victory. We needed to refuel the tanks. A sea food platter offered the required relief. 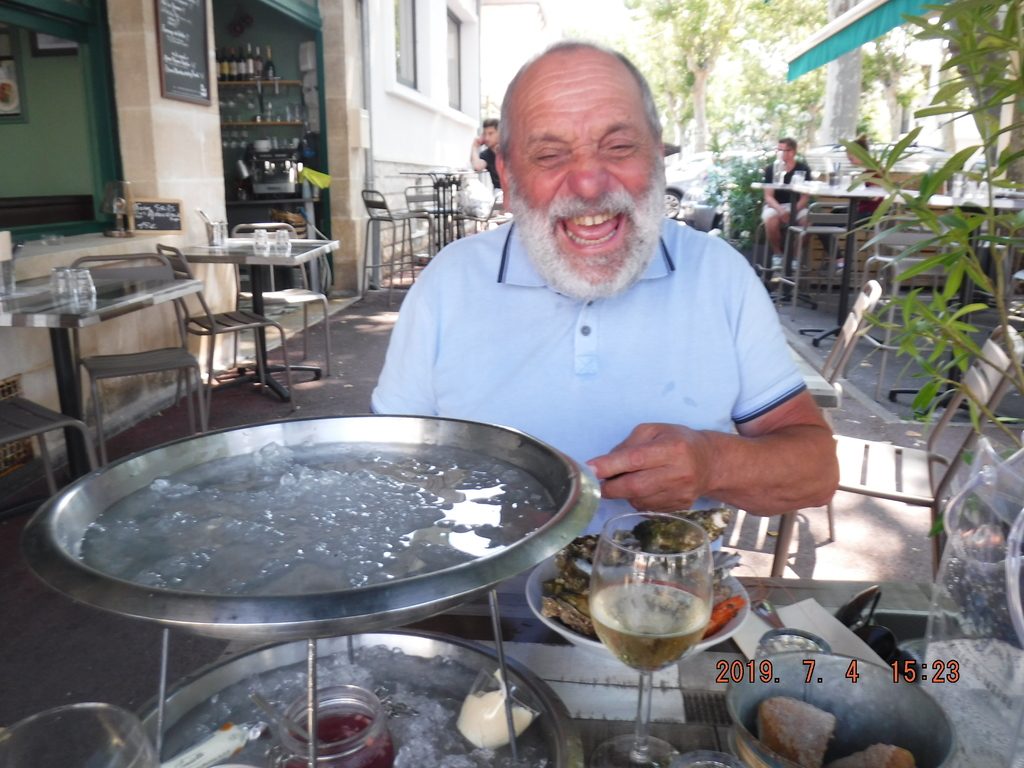 DONE! No prisoners, no doggy bag. Head for the last stop of the day in Bordeaux.

Visit of Bordeaux, few pictures, did not save them. The disaster will happen tomorrow.

Left Bordeaux unable to cool the Airbnb, hoping that La Rochelle will offer some lower temperatures. Unfortunately we lost the camera we used for this trip.
TOO BAD!

Hoping to recover the lost camera, we returned to the Fort of l’ile d’Oléron. 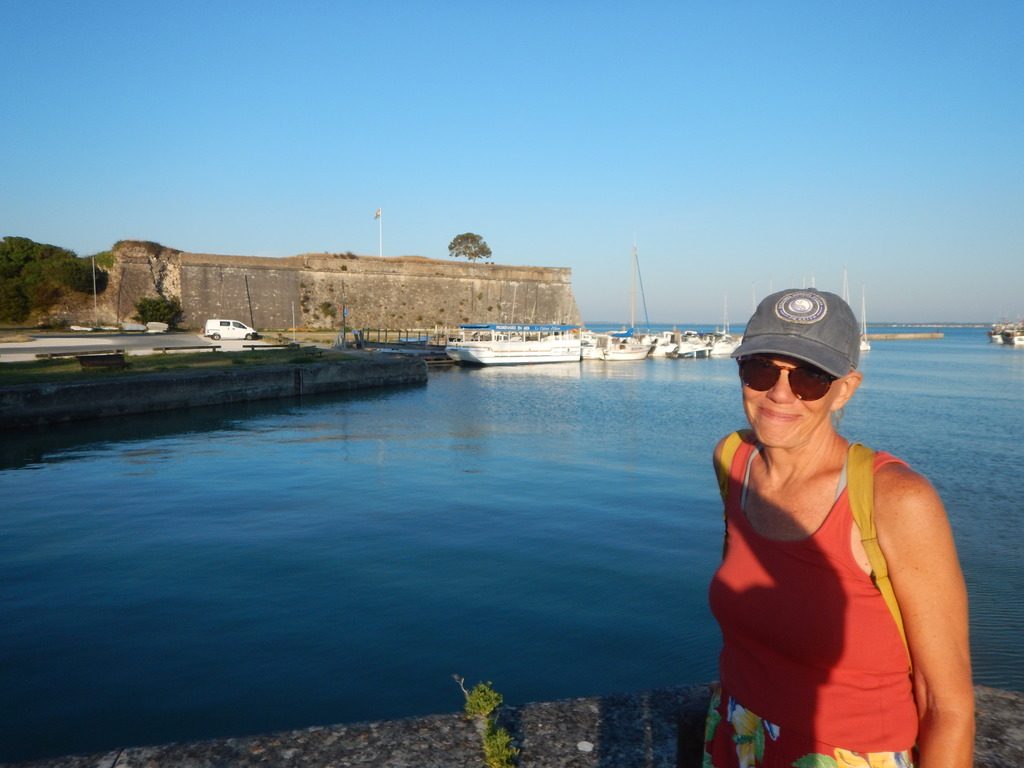 Susan is kind of disappointed, had to find an activity to restore her smile. 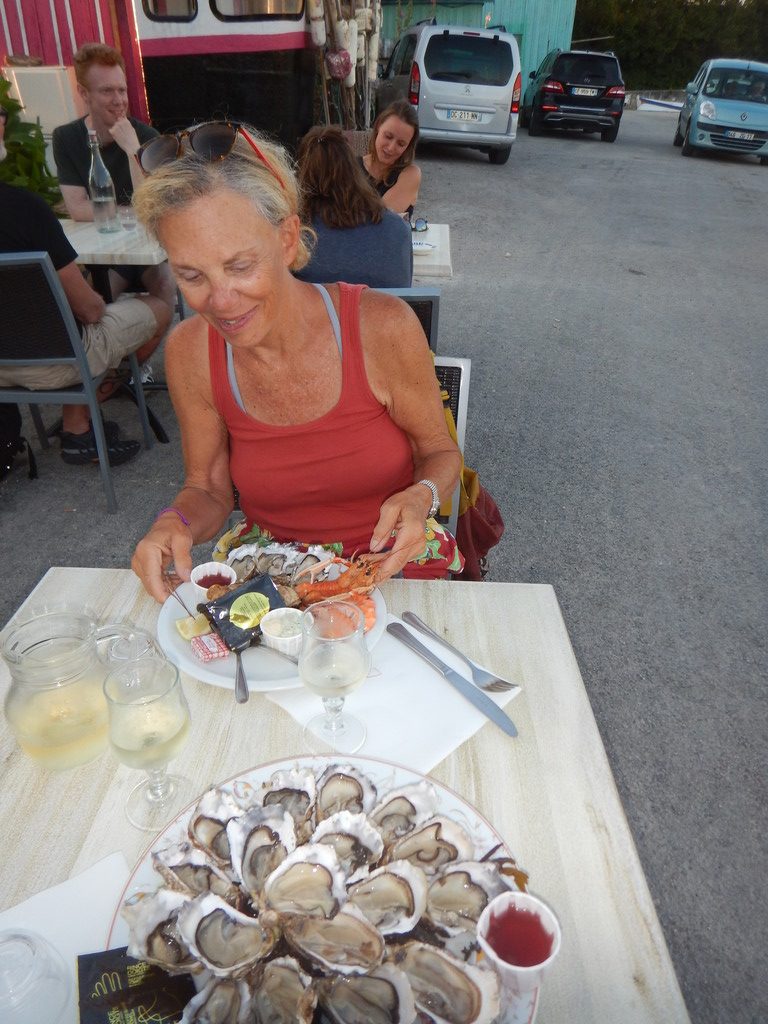 The usual suspect, a sea food platter was the obvious solution.
What a lack of imagination.

Tomorrow a last attempt will be made to recover the lost camera, little hope.
On the other hand week 5 is on the way.
It will be enjoyed in La Rochelle leaving for Quimiac on Saturday 13.